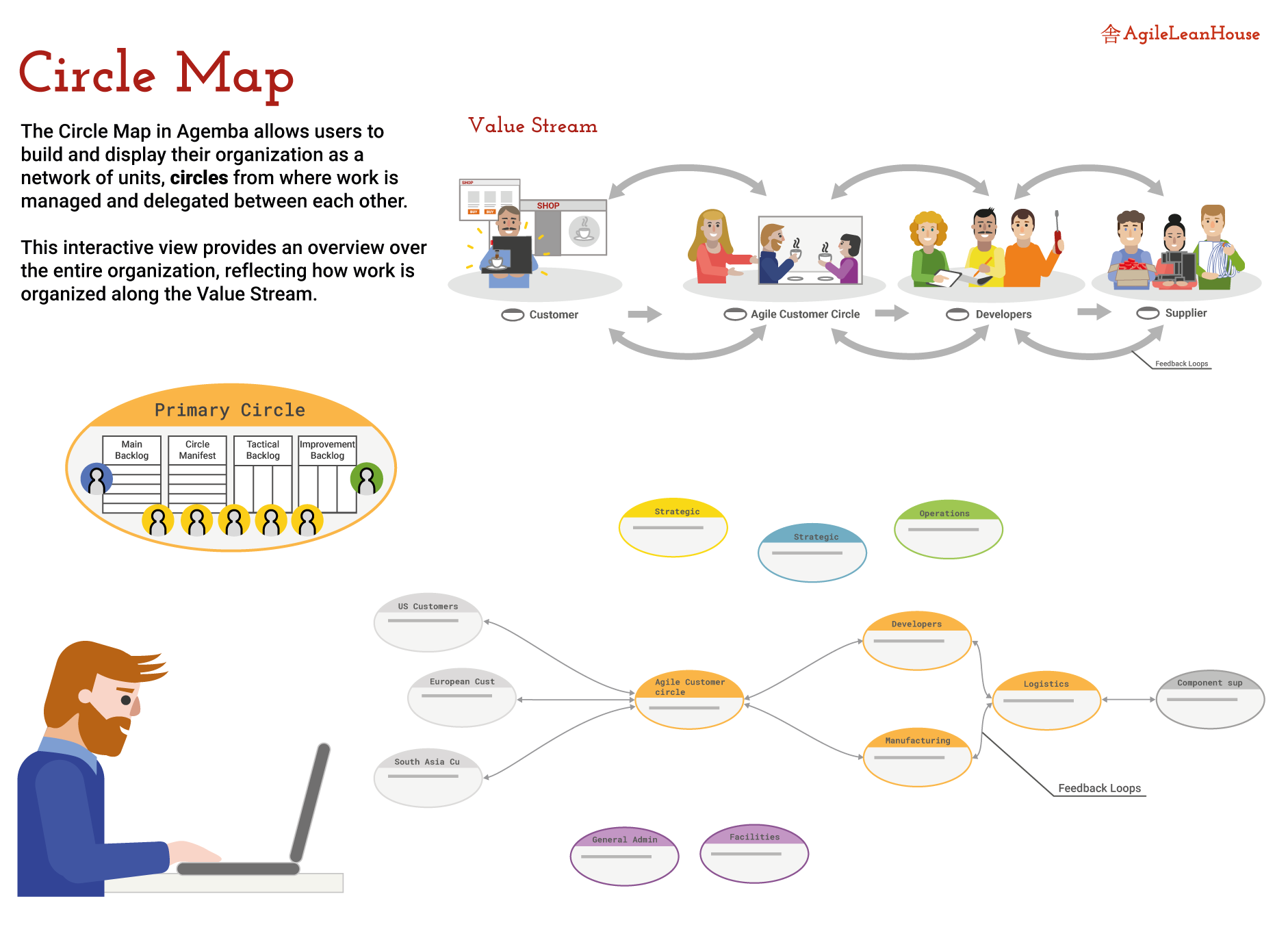 As an organization grows and complexity sets in, visualizing it either by the roles of its people or the functions of its departments becomes necessary if it is to stay on track. This is the reason why in as early as 1854, the engineer Daniel McCallum came up with the idea of an organizational chart. It did not take long, however, before its major limitation was discovered which was constantly keeping it up-to-date. The Circle Map in Agemba seeks to overcome this challenge and other challenges by visualizing the actual structure of teams in circles and also the progress of work across teams in the organization.

The Circle Map example above illustrates the various circles or teams that comprise an organization, showing how they relate to each other and how work is distributed among them. Each Circle has a visible description, stating its purpose and function.

To allow work to be shared by multiple Circles, relationships are created between them, referred to as “delegations.” The lines connecting the Circles denote the relationships and the arrows indicate the direction in which the workflows, or is delegated. Each of these relationships has a manifest that can be used to state the purpose, terms and function of the relationship.

Circle types correspond with the patterns explained in Agile Lean Leadership but provide enough flexibility to accurately define all forms of organization. Circle types include:

Primary Circle – This is where the work happens. Examples might include an internal Circle doing software development, or one on periphery handling customer support.

Customer Circle – These Circles allow the customer to engage fully with the process, where appropriate, as Agemba users.

Level Circle –  Primary Circles typically include a Commanding Officer dealing with strategic business issues, an Executive Officer dealing with the tactical, or technical issues and Team members who do the work. When issues require “pan-Circle” coordination or resolution, Level Circles provide the forum, typically bringing together those with similar roles, such as Commanding or Executive Officers.

Each Circle has red, yellow, and green “traffic light” indicators denoting its status. There is also a “Comment” function through which additional information or progress reports can be conveyed to other users.

The Circle relationships illustrated by lines and arrows can be edited at any time by users with the right permissions. The working terms of each relationship and delegation are described in the Circle Manifest and must be updated when changes are made.

Once the relationship between Circles is established, Epics and Stories can be delegated from other views, such as the Storymap, Outline, Product Backlog or Sprint Backlog.

An exact copy of the delegated Epic/Story will then be created in the Circle which it was delegated to. Then its properties including comments and attachments will be kept in sync with the copy.