located at the top right corner of the List view gives access to the facilities for customizing lists. Site Administrator or Circle Leadership users can create and maintain public lists that other users can use, as well as private lists for personal use only. Internal Site users and Circle Regular users are only allowed to create and maintain private lists, whereas the External Site users and Circle Limited users are not allowed to customize lists.
The snippet below shows the view a user with Leadership role sees when customizing lists in the Circle. 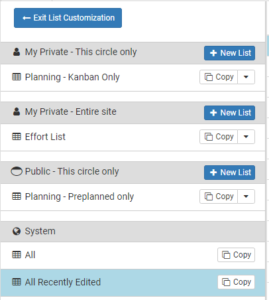 There are two ways to create a List regardless of the category it falls under:

My Private – This circle only
Lists created in this category will only be available for the current user within the current Circle.

Lists created in this category will be available for the current user within the entire Site.

Regardless of the way a public List is created, it will first be created as a draft. This draft can then be customized by either editing its title or description or by customizing its properties such as columns or base filters.  After the List is considered done and ready, it can be published. All these actions are available from the dropdown menu on the List:

NB: The changes made to a draft public list are not published automatically and require the user to manually publish the changes. The same also goes for published lists, where editing will save the changes in a draft until it is republished. The draft changes are not visible to all the other users until it is published.
Lists can be public for users in the entire Site or only those in the Circle to access; Public – Entire site and Public – This circle only respectively.

Existing lists can be edited i.e the title, description, columns and base filters etc. from the dropdown next to the specific list.