In the Product Backlog View you can prioritize epics, stories etc. and order these in releases and depending on whether enabled on the Circle, also sprints, kanban lanes or preplanned lanes. Unplanned items can be dragged in from the left pane.

In the right pane you can view and add Releases as shown below:

You can then create Sprints (only if enabled on Circle) within the Releases.

You can drag items (Epics, Stories, Issues etc.) into a release or sprint. Use drag and drop to reorder items. If you want to remove an item from the release or sprint, right-click on the item and select “Remove from Release”.

If enabled, one or more Sprints can be created within a Release, from its context menu. Items can then be planned to the Sprint by dragging them from the left pane or from the other containers.

It is only possible to work with Kanban in the Circle if it is enabled from the Circle configuration.

Kanban is a lean method to manage and improve work across human systems. This approach aims to manage work by balancing demands with available capacity, and by improving the handling of system-level bottlenecks.

A Kanban lane can be created here following the same way of creating Releases right above, and will appear right below the last Release lane. Items can then be planned to the lane by dragging them from the left pane or from the other containers. See Kanban lane for more details.

If you drag an epic to a release and the epic has unplanned child stories, these are indirectly planned to the release. But only the epic card (not its child cards) are visible in the release. This is to simplify the view.

If all the children of an epic are planned to releases or sprints (only if enabled on Circle), then the parent item is indirectly planned to the last release containing one of its children.

A Preplanned list can be included in the Product Backlog in very much the same way as a Release. Items can then be planned to the Preplanned List by dragging them from the left pane or from the other containers.

The connections map is available in the Product Backlog to give a quick overview of the impact a specific story or other item has, such as when and where it is planned, what it solves or what depends on it.
It shows the card centered and all the other items impacted by it, suspended around it as can be seen in the snippet below: 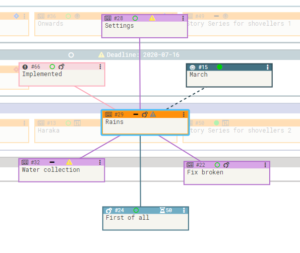 To see the connections map of a particular story or any other item in the Product Backlog, right click its card and there should be a menu item to do that.
Once open, the details of any of the cards can be seen by clicking to select and then unfolding the right pane.
To close the connections map, click anywhere outside the cards on display.

Enter key will open a modal window with the overview of the currently selected card.

Ctrl + E  loads the edit form for a selected item

Up and Down Arrow keys will select items up and down the left pane list as well as the main view, respectively.

Esc will close any open modal windows or forms.