Stories are visible in the StoryMap Tree in the “What” section. Like epics, ideas etc, it has a user story text describing a request seen from the user perspective.

Below is an illustration of an ordinary Story, highlighting common icons displayed on cards and what they represent:

In the Storymap Tree, epics and stories are visualised as parents and children in a tree. The epics are the parents with the high-level user stories, and the stories are the children with the smaller (in effort time) user stories. 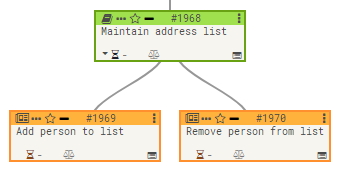 If a user story is too large to be completed in one sprint it should be created as an epic.  The epic card can then have a number of story card children. In general the child stories should cover the requirements of the parent epics.

It is not always obvious in the initial planning, whether an epic or a story should be created. You can later on convert a story to an epic and vise versa. There are some limitations, though.  For instance you cannot convert an epic to a story, if it has children. And you cannot convert a story to an epic, if the story is already placed in a sprint (because epics cannot be placed in a sprint).